Are you missing teeth, or do you have gaps between your teeth? There is hope at Ellen Stirling Dental! We offer dental bridges that are customised to fit your mouth perfectly to give you that sought-after beautiful smile. 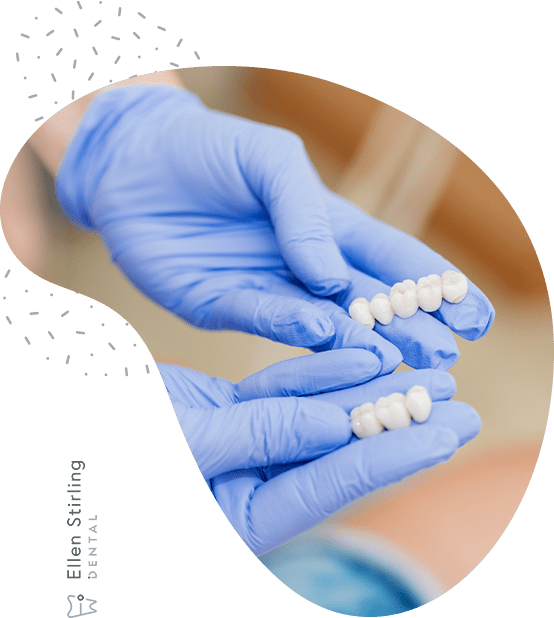 What are
Dental Bridge?

What if you could get that missing tooth back with a custom-made permanent solution at Ellen Stirling Dental? You’d be able to eat, speak, and smile with confidence again. Dental bridges are the perfect restoration treatment option for filling gaps of one or two teeth between two healthy teeth. They are dental prostheses that imitate the form, function, and appearance of natural teeth.

Benefits of a
Dental Bridge

A missing tooth can cause various health issues. Bridges can replace missing teeth and provide the following benefits: Why Choose
Ellen Stirling Dental in Ellenbrook for Your Dental Bridge

Is a tooth missing from your smile?

Ellen Stirling Dental can help. Our dental bridges are the perfect way to fill gaps between teeth and restore your perfect smile. They’re custom-made by local specialist dental technicians right here in Perth, so we can keep an eye on quality control to ensure they’re at the absolute peak of what is possible. That means you get a permanent solution that looks great, and feels fantastic, too! Moreover, they look just like natural teeth, so no one will know you even had any work done!

You deserve nothing but the best when it comes to your dental health and appearance, which is why our team of experienced dentists works hard every day to provide you with the best possible level of care. No matter how busy life gets, there’s always time for good oral hygiene habits that will protect your perfect smile for years to come! What are the types of dental bridges?

Dental bridges can be categorised into four basic types:

Traditional Dental Bridge: The most common type of bridge is the traditional dental bridge. Ceramic, porcelain fused with metal, or all-metal, such as gold, are used for these types of bridges. Traditional bridges consist of one fake tooth, commonly called a pontic, which is attached to a dental crown on each side. Traditional bridges are primarily used to restore premolars and molars, which are located in the back of the mouth.

A Maryland bridge can only be utilised if you have a natural tooth on each side of the gap produced by the missing teeth, just like a standard bridge. Typically, Maryland bridges are used for restoring front teeth. They are rarely used to restore teeth at the back of the mouth since the canines are vital to your bite functionality, and Maryland bridges are easily shifted or loosened.

What is the process of getting a dental bridge?

The second appointment will be scheduled once the permanent bridge is ready for placement.

What is the cost of a dental bridge?

Dental bridge cost is determined by various factors, including the number of teeth that need to be replaced, the bridge type, the placement’s intricacy, and whether or not further dental treatments are required. Treatment can cost anything from $2,000 to $5,000. An implant-supported bridge, on the other hand, can cost up to $9,000.

How long do dental bridges last?

What are the alternatives to dental bridges?

These are the dental bridge alternatives to replace missing teeth:

Partial Denture: Dentures, or false teeth, are made up of one or more prosthetic teeth attached to a plastic and metal framework that clips around the original teeth. False teeth are versatile in that they can be created to fit around any number of healthy teeth. A full set of dentures is also available for those who have lost all their teeth.

Dental Implant: A dental implant is surgically inserted into the jawbone, replacing the tooth root. They’re typically constructed of titanium, a tough substance that’s also biocompatible, so they shouldn’t cause an allergic reaction or rejection. The crown (replacement tooth) is held in place by an abutment attached to the implant.

What is the aftercare of dental bridges?

The following steps will help you maintain your dental bridge:

Foods to avoid: While your permanent bridge is being manufactured, your dentist will place a temporary bridge over the newly shaped teeth to protect it.

During this period, do not eat or chew sticky or chewy foods, such as gum and candy, and hard foods, such as nuts and ice cubes. While the temporary bridge is in place, it’s also important to chew on the opposite side of your mouth.

After the permanent bridge has been placed, you should refrain from eating sticky or hard foods for at least 24 hours. After this time, you can resume your regular eating habits.

Pain management: The procedures for traditional, Maryland, and cantilever bridges are all pretty painless. Gum swelling or pain may occur in some people. To relieve pain, we recommend taking over-the-counter pain relievers like ibuprofen.

Oral hygiene: When a permanent bridge is placed, it is necessary to take extra oral hygiene measures since the area where the pontic rests on the gums is challenging to clean and can create plaque buildup.

Rinse with mouthwash frequently, brush at least twice a day, and floss beneath the bridge regularly to help reduce inflammation and prevent cavities along the bridge’s edge. Flossing between the teeth of a dental bridge necessitates floss threaders, super floss, or water flossers.

When would I need a bridge?

You may need a dental bridge after a tooth extraction or tooth loss due to tooth decay, trauma, gum disease, or old age. Additionally, your dentist may recommend a dental bridge if you need dental implants but can’t get them for medical reasons.